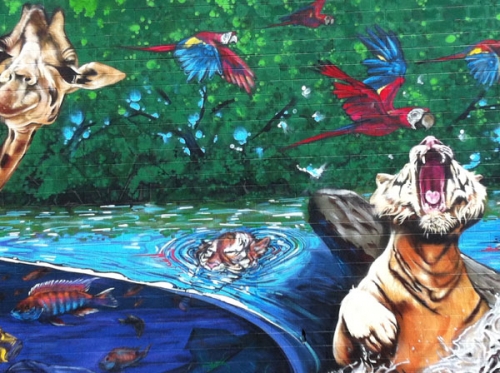 Let's take a trip through Salt Lake's West Side, via the public art landmarks that can be found in every neighborhood. Here's a taste of what you can see walking or biking or driving around the West Side, examples of the diversity of styles from both local and out-of-state artists.

Moving west and north, across Redwood Road from Rose Park, to Westpointe Park, a large multi-use open space for a newer neighborhood bordered by I-15 on the west. Two photographers, Wayne Chubin and Tim Gallagher (former residents of Salt Lake), ventured into the three-dimensional world with their Signal Site in Westpointe Park. The piece is laid out along the mathematical basis of the Fibonacci sequence, a series of numbers embraced by mathematicians and found in nature. The figures atop each post were vetted with the help of the Anti-Gang Task Force of the SLC Police Department to ensure that none of them were inadvertently associated with any of the local gangs. (1100 North 1900 West)

Located in Guadalupe Park, Lupita, the Woman was created by Salt Lake artist Willy Littig after he walked the neighborhood for days talking to the residents and finding out what living in the Guadalupe neighborhood means to them. The sculpture serves as a landmark and her base is often strewn with roses and candelas (spiritual candles) in celebration or commemoration. In this image of Lupita, you can see a single candela placed on the left front corner of the base. (600 West 500 North)

Bridges Over Barriers, an extensive painted mural accompanied by exquisitely detailed mosaic columns in the I-15 underpass at about 300 North and 700 West, represents a remarkable multi-year relationship with artists, children, neighbors, and businesses in a transitional area on the West Side. A project of the nonprofit Neighborworks, and originally inspired by internationally known community catalyst/artist Lily Yeh, the mural took shape with a team of local artists and young people from the neighborhood. Jimmy Lucero, Salt Lake artist, helped bring the mural to completion, celebrated with a community party that included a Native American blessing ceremony. (700 West 300 North)

Traveling south, you can find Neighborhood House, an active nonprofit center on the West Side for many years. Providing services both to older and younger clients, this nonprofit incorporates art into its activities and its built environment. The mosaic mural at the front entrance of Neighborhood House was created by local artist Sarah Moyer and a team of young artists. (1050 West 500 South)

Farther south, the regional Jordan Park provides a multitude of open spaces and activities and is embraced by the Jordan River. California sculptor Robert Ellison created Tweak 360 for the skatepark in Jordan Park. The colors and swoops of the piece capture the movement and energy of skaters and bikers in constant motion. One afternoon, two older teenagers sat on the bench by the skatepark, watching to make sure that the sculpture was not tagged, because "the sculpture and the skatepark belong to our neighborhood." (1060 South 900 West)

A breathtaking exhibit of sculpture, history and flower gardens is also located in Jordan Park: The International Peace Gardens was established decades ago with participation by many of the immigrant groups that have made Salt Lake their home. Almost 30 countries are currently represented. One of the landmark sculptures in the Peace Gardens is the smaller scale version of The Little Mermaid in Denmark's garden. This sculpture is based on the original sculpture by the same artist (Edvard Eriksen) who created the one located in Copenhagen. (1060 South 900 West)

And just north of Jordan Park, a painting of Our Lady of Guadalupe brightens the wall of a local shop on 900 West, about 500 South.

Moving south along the Jordan River is a large expanse of unmanicured green space with trails that local residents use for strolling. In the midst of this natural growth is a serene spot designed by a team of Salt Lake artists (Paul Heath, Louise Fischman, Wayne Geary and Linda Nowlin). Quite large in its expanse, the artists created a meditation spot with a paved labyrinth, a landform found in many cultures, encircled by mosaic-tiled benches. The untitled piece offers a chance to reflect at the center of a rare natural setting in an urban environment. (1550 South 1110 West)

Traveling east towards downtown, you find the People's Portable Garden at 900 South 200 West. Utah artist Greg Ragland was selected to create public art for the garden, and he arrived at a fanciful assortment of giant colorful vegetables, among them a pea pod, a cherry tomato on a toothpick, and a series of bell pepper slices. The garden, maintained by residents of the neighborhood, puts an empty lot to good use, animating the street corner with daily activity during the growing season and a robust harvest. (200 West 900 South)

Moving north, on 800 South and 650 West, the north side of a warehouse along the railroad tracks, now serving as a Haunted House, is covered by a very large scale mural. Professionally executed, the images are powerful, suited to the industrial site, and scary but not so frightful as to drive you off the road. (650 West 800 South)

Farther north, the Utah Arts Alliance has developed a former construction company headquarters at about 700 West 100 South. Dubbed The Hub, this center offers space for artists in all disciplines and presents a number of public events every year. One of the distinctive characteristics at The Hub is the series of murals on the exterior walls of the buildings that house studio, meeting, workshop and performance spaces. (663 West 100 South)

You can finish the tour at Salt Lake Central, the intermodal hub at 200 South and 600 West, where bicycle, train, bus and foot traffic intersect. If you hop on a TRAX train, you can see original artwork at each station riding north and west to the airport, or east to downtown.

At Salt Lake Central, Norie Sato, from Seattle, created a series of 15 sculptures scattered throughout the plaza. The sculpture collection is titled Traveling Stones and Other Vagabonds. Sato selected briefcases, backpacks, suitcases and other carrying cases found at local Deseret Industries and secondhand stores to be cast in bronze by the Utah County foundry Metal Arts and coupled with stone quarried locally. (250 South 600 West)

Salt Lake's West Side is rich is many ways, not the least of which is in the multiplicity and diversity of public art to be discovered.