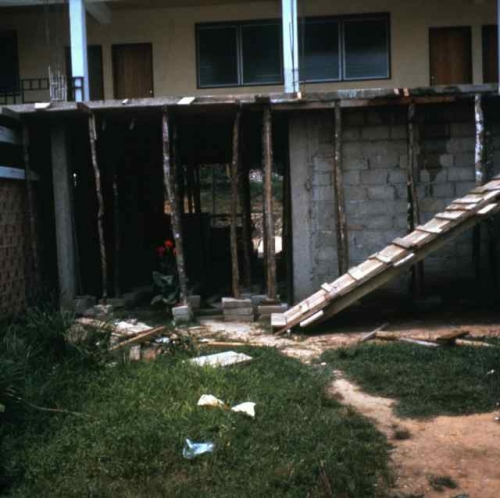 On January 24, 1972[i] Robert Smithson presented a lecture to architecture students at the University of Utah at the invitation of Robert Bliss, then Dean of the School of Architecture. The lecture fulfilled part of Smithson’s contract with the University as Visiting Professor of Architecture for the calendar year 1972. Bliss and his wife, Anna Campbell Bliss, had known Smithson and his wife the artist Nancy Holt for about a year, having been introduced through their mutual friend, curator and arts administrator Jan van der Marck. With this recorded talk Smithson completed his slide/audio artwork, Hotel Palenque, begun with the making of thirty-one color slides in Palenque, Mexico in 1969.

Smithson’s ability to transcend traditional mediums was one of the many ways he informed and altered contemporary artistic practices. To illustrate how a lecture becomes a work of art, let's consider the medium: thirty-one color slides were projected, and narrated in a sound recording by Smithson.  All images were later published in the bi-lingual journal Parkett, accompanied by Smithson’s narrative of each slide (in English and German).[ii] Following Smithson’s insert in Parkett is an essay by Neville Wakefield, also in English and German.[iii] The slides and audio recording (42 minutes, 57 seconds) became the work that was acquired by the Guggenheim Museum in 1999.[iv] Smithson’s Utah recorded lecture and slides are exhibited together as a work of art and lent to other institutions. From lecture to magazine article to touring work of art, Hotel Palenque may have originated in Utah, but as with other works by Smithson (think the Spiral Jetty in formats of earthwork, film, essay, etc.) it gained an international audience.

Transcending place through travel and performative action were additional ways Smithson broke down conventional forms of art. Smithson’s 1972 lecture originated in Mexico, based upon a trip he, Holt, and their friend (and Smithson’s gallerist) Virginia Dwan took in 1969. The lecture became the performative platform for a meditation on the entropic process found within one building, not a straightforward discussion on indigenous architecture, as the students expected. Images span a building in ruin, stasis, and current repair. In slide fifteen Smithson narrated, “Here you can see the modern part of the building. It should be starting to take shape in your mind at this point. You should be getting the point that I am trying to make, which is no point actually. The interesting thing about this whole place is that there is no point of rest” (124). The student’s reaction was initial confusion, as Bliss remembered, “they didn’t understand what he was doing at first, he was talking about growth and decay and entropy.”[v] Art historian Robert Hobbs described the student’s reaction, “Only after Smithson had talked for twenty minutes did they laugh when they comprehended how he had undermined current architectural premises.”[vi]

Wakefield’s essay summarized the talk not from the perspective of one in attendance, but as one appreciative of Smithson’s artistic compass. The lecture was “more stoned than stentorian in form, delivery and content, it appears navigationally errant and subject to drift … The architectural mass of the ancient Mayan ruins for which Palenque is famous is all but ignored: its pull just another weak signal from a past already muffled by the alluvion of time” (134). The grand themes Smithson invited us to comprehend in the world around us could not have been summarized better than in the last slide of Hotel Palenque as he said,

At first you notice right at the back that it’s green, right? There’s not really much you can say about it, I mean it’s just a green door. We’ve all seen green doors at one time in our lives. It gives out a sense of universality that way, a sense of kind of global cohesion. The door probably opens to nowhere and closes on nowhere so that we leave the Hotel Palenque with this closed door and return to the University of Utah. (132)