The Joe Hill House of Hospitality 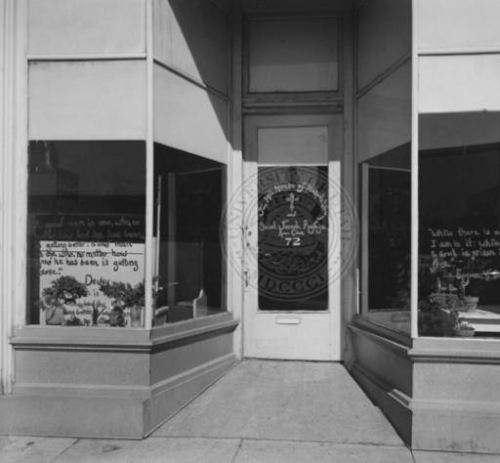 In 1961, Dorothy Day, a leader in the Catholic Worker Movement, sent Ammon Hennacy to Utah on a mission to establish a house of hospitality. Hennacy, a man Day called "love in action," [see Footnote i] was a Christian anarchist, pacifist, social activist, and, after moving to Salt Lake, a repeat picketer at the Utah State Capitol. He frequented the capitol to protest the state's policy of capital punishment, marching up State Street's steep slope any time citizens were sentenced to death. When it was established, Hennacy named his hospitable house, founded with his wife Mary Lathrop, the Joe Hill House of Hospitality. Joe Hill, a Wobbly labor organizer, had been executed in Salt Lake 46 years earlier under suspicious circumstances. Painting "Joe Hill" across the house's front door signaled the organization's affinity with Hill and his history of championing workers, challenging social institutions, and fighting for the community at large. Hennacy also chose the name so "Joe Hill" would remain in the minds and mouths of the state that allowed Hill's execution.

After disputes with the Salt Lake City Health Department over the number of people being housed at his house of hospitality at 72 Post Office Pl (now 72 W Market St), Ammon Hennacy and his band of "pacifists, anarchists, subversives, and Catholics too radical for our bishop," [see Footnote ii] relocated the house to 1131 S 200 W in September 1964. The Joe Hill House of Hospitality sheltered the homeless, men who rode the rails, and anyone in need of shelter. As Hennacy said before the house opened, it was established "to feed those hungry who come to us. There will be no 'singing for your supper.' No questions or prayers forced upon anyone." [see Footnote iii] This compassionate, inclusive attitude also attracted like-minded citizens in Salt Lake who were looking for a space to gather. On Friday nights students from the University of Utah, long-time political activists, and residents of the house would sing along with Hennacy from his Wobbly songbook.

The Joe Hill House was eventually closed by the Utah Migrant Council. Ammon Hennacy, though he was getting on in years, and despite the fact that his original mission in Salt Lake had ended with the closing of the house of hospitality, remained politically active in the city until his death. On January 8, 1970, Hennacy marched up to the State Capitol one last time. For the fourth day in a row he was on his way to picket on behalf of two men facing the death penalty when he had a heart attack. Hennacy's last written words were, "All that I'm trying to do is to go a bit farther like Christ did—that those without sin should first cast the stone.... I have been picketing and saying this for the last nine years in Salt Lake City and will continue to do so as long as I live." [see Footnote iv] Ammon Hennacy's life of "love in action" ended on January 14, 1970.

iii http://ah.lovarchy.org/quotes.html
from the leaflet entitled: "THOU SHALT NOT KILL but 83% of Our Federal Income Tax Goes for War and Killing"

iv A Revolution of the Heart: Essays on the Catholic Worker

Photos for the Joe Hill House of Hospitality from Marriott Library